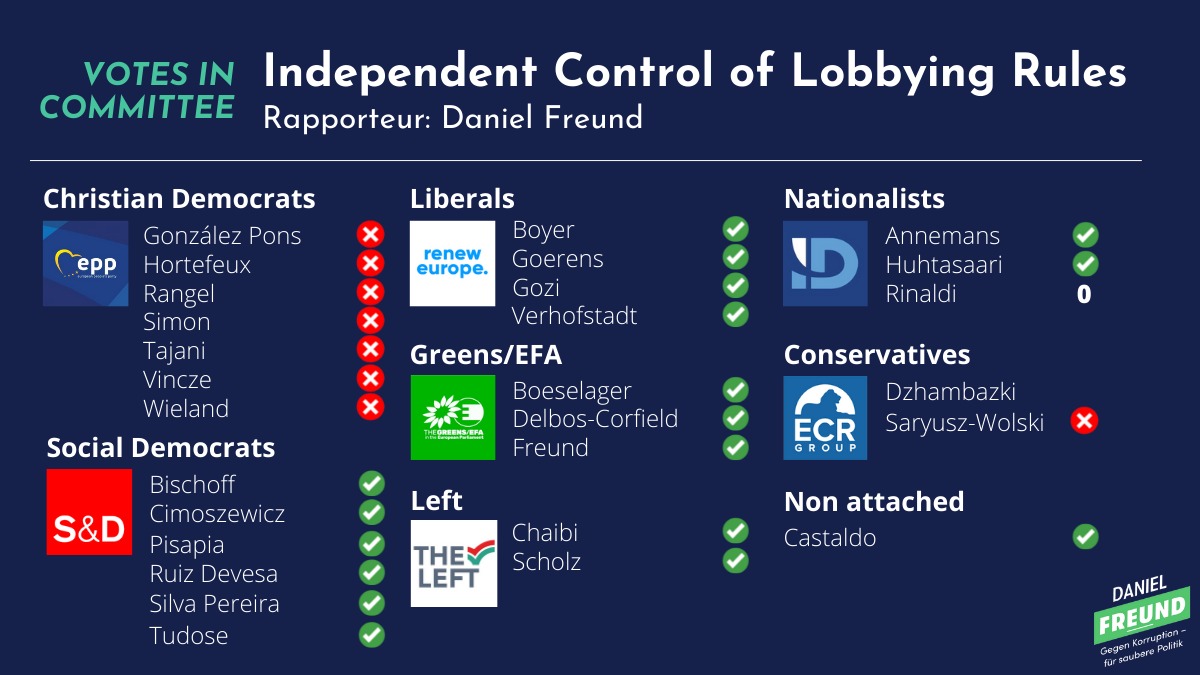 Lobbying rules in the European Parliament and the EU Commission are to be independently controlled in the future. A majority of MEPs in the Committee on Constitutional Affairs voted in favour (18 yes, 8 no, 1 abstention) of the corresponding report on the creation of an ethics body yesterday evening (Wednesday, 14 July). The Greens, Social-Democrats, Liberals and Left have thus prevailed against the opposition of the Christian-Democrats. The ethics body is to focus on conflicts of interest and revolving door issues. The vote in plenary is expected to take place in September.

The independent ethics body was included in the Green election manifesto on the initiative of Daniel Freund and was one of the Green demands for the 2019 European elections. Commission President Ursula von der Leyen (CDU) supports the Green proposal. EPP Group President Manfred Weber (CSU) had also promised its support to voters during his campaign as EPP lead candidate*.

Daniel Freund, European Parliament rapporteur on “Improving Transparency and Integrity in the EU Institutions through the Establishment of an Independent EU Ethics Body”, comments:

“The Constitutional Affairs Committee’s yes to the EU ethics body is a great success. Our commitment to clean politics in Brussels is paying off. The vote is an important step for clean EU institutions without conflicts of interest. We Greens had called for such a body in the campaign for the 2019 European elections. The fact that the responsible committee of the Parliament is now backing it, shows that Green policies work in Europe!”

“Independent control can finally enforce the rules in a credible way, stop direct moves into lobbying and thus win back the trust of citizens. The previous system of self-regulation has failed to prevent too many scandals. Too much trust in the EU has been destroyed by the countless new lobby jobs of former EU Commissioner Günther Oettinger, the buy off of Commission insiders by the banking lobby, Facebook, Vodafone and others. By establishing independent oversight of ethics rules, the EU can make exemplary practices from France and Canada the new standard for Europe.”

“The Christian Democrats’ opposition to independent oversight is revealing. Only weeks after their scandals on provisions for mask procurements and Azerbaijan networks came to light, the same German Christian-Democrats led the votes against effective enforcement of existing lobbying rules. Even Ursula von der Leyen (CDU) and Manfred Weber (CSU) had promised such a body to create more transparency in the EU institutions! The Christian Democrats must show in the plenary vote in September whether they want to continue to stand in the way of independent control against corruption, conflicts of interest and revolving doors between EU institutions and the lobby.”

Key points of the report

NGO letter with criticism of the compromises: https://transparency.eu/concerns-independent-eu-ethics-body/

Recordings of the public discussions among the negotiators of the political groups with experts and further material: https://www.greens-efa.eu/de/campaigns/ethics-body